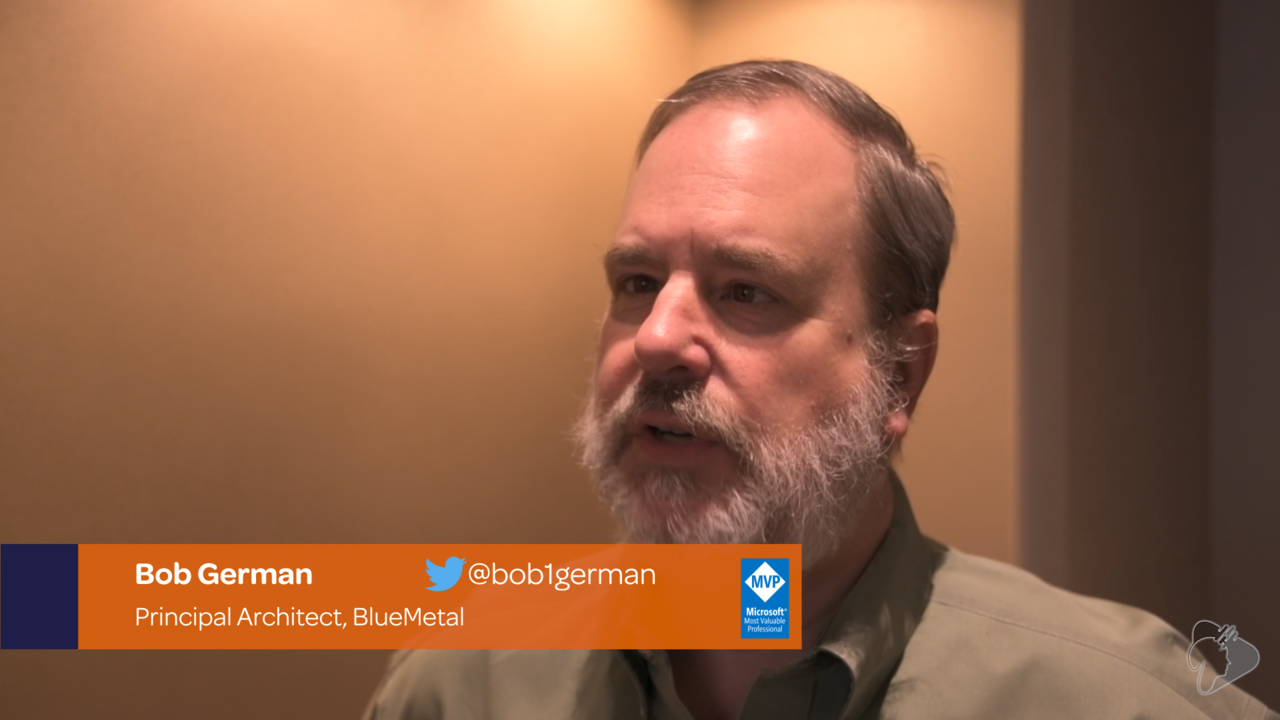 So my name is Bob German, and I've been a SharePoint fan since it was called SiteServer.

I did start with SiteServer. I kind of skipped SharePoint 2001, but it's kind of one of the cool things about this is it's the last time they've really changed the user experience, or the way you develop for the UX was when dot net came out in 2002. So I've been there all the way through all the different phases and fits and starts of different ways of doing it.

I've spent a fair amount of time. I guess I got involved in it in the first Developer Kitchen, which was February of 2016, and I've been playing around with it ever since. What I've been trying to do is develop solutions that will later go into the SharePoint framework. It only recently shipped, so over the last year, I've been building solutions for my clients and kind of coaching my team to build things for my clients, that we can later port in. So there are some rules of the road there, of making it self-contained and following certain guidelines to make sure that it will work when you port it over. And I've been pretty pleased with the results. I did a talk here at SPTechCon on future proof and was able to demo a couple of things that I had built actually up to two years ago, that ported over 95% of reuse into the SharePoint framework.

Well, I think it's a really important and good thing overall. It's a big change. It's a lot for a lot of us to digest, but if they didn't do it, we'd end up - no offense to the Lotus Notes fans - but we'd end up like Lotus Notes. Microsoft has to embrace the clouded device era with SharePoint or SharePoint will die. It will just fade away. And this is a credible way to do it. The other thing is over the years, they just kept adding new layers on top of what they had, and that just made it heavier and heavier, and more and more arcane and archaic to actually build anything. While this may seem unfamiliar to a lot of SharePoint developers, it's actually good to see it be a clean start, and not have to carry all that baggage of weird things like scripting on demand, and XXLT. And even JS Link and stuff are looking a little bit long in the tooth at this point.

I love what I see up on their roadmap. It'll be interesting to see when it all comes out. It's also great that they're being so open about it, right? So there's a website where you can go and see. It kind of looks like a mini version of their backlog. And I think they're doing all the right things. There's some sort of pain points, like the modern libraries and lists. I had a customer who got really badly affected by having their custom actions break, so I'm hoping that they fix that. Also hoping for single page applications where we can really just party down, do whatever the customer needs, but really make a unique page experience on top of SharePoint.

I guess, my favorite part...I'm gonna go with TypeScript. I like that it's TypeScript first and that the entire framework is in TypeScript. This really was my introduction to TypeScript. I had looked at it a little bit, but I hadn't started using it every day, and now I feel completely like I'm missing it if I don't have it. I go back to JavaScript, and I can do it, and in fact, I probably do it more often than not. It's funny. I actually give my clients- if the client has a...I'm in consulting if that wasn't obvious...if my client has a developer team, I try to talk them into TypeScript, but I give them the opt out, because they may not want to have to learn it. But without it, I just feel like I'm not delivering the same level of robustness, and it's just not as much fun.

Right now I'm gonna go back to those two things that are already on their backlog. I really want something that will replace custom actions, display templates, that kind of thing, and also something that would allow me to do a single page app.

One thing I would change. I think it's not a big change. I would just like to see a lot better documentation. Trying to figure out how to do things is often an exercise in reverse engineering, and I know that different versions- if you've been at this - and I know you have - as long as I have, some versions kind of come out and technical writing is right there, and you've got everything laid out. And others, well, you're kind of left on your own. I'm feeling kind of like we're left on our own, which is unfortunate given how big the change is. We're looking at blogs - thank you so much for all your blog articles, Andrew - but it's like why isn't there more up on Microsoft?

I think the biggest challenge is the learning curve, is the shift. I think it's a healthy challenge, although it's a little bit ironic that one of the reasons that I was told that they shifted to more of an open source stack was so they could attract more developers. But what I'm starting to suspect is that you have to still know kind of what SharePoint is and how it works, you still have to know the object model underneath for making REST calls or what have you, and you got to learn TypeScript, and you kind of end up wanting to know React. I'm starting to feel that the product is written in React. All the first party web parts are written in React. The UI fabric support is better in React. I'm just starting to feel like, "I don't want to swim upstream; I'm just gonna do React." But all those things I think narrow it back down. So they widened it out, and now it's narrowed back down again to these people who have this- and this is maybe not Microsoft, right? It's just the way the web development world is. It's like a Chinese menu; every single item, you can choose a different choice. So to find somebody with the experience of all the choices is that they've made, I think is a challenge. So enterprise developers, this is really unfamiliar to most of the people I talk to and who I work with.

I think in the future, this is gonna be the...this is the future. Microsoft is gonna replace every single page or augment with a choice, at least for a while, every single page in SharePoint, so that eventually you don't need to see any classic pages at all. There'll be some bumps along the road. There'll be some places, like with the modern document libraries when they came out, and some things broke. And I think Microsoft learned from that, that they had to maybe give it a little bit more of a soft roll out. But they do kind of push things out a little bit aggressively. I understand they want to drive adoption, but it's hard for people to test internally. So my theory is it's gonna happen. We're gonna move completely over to the new model.