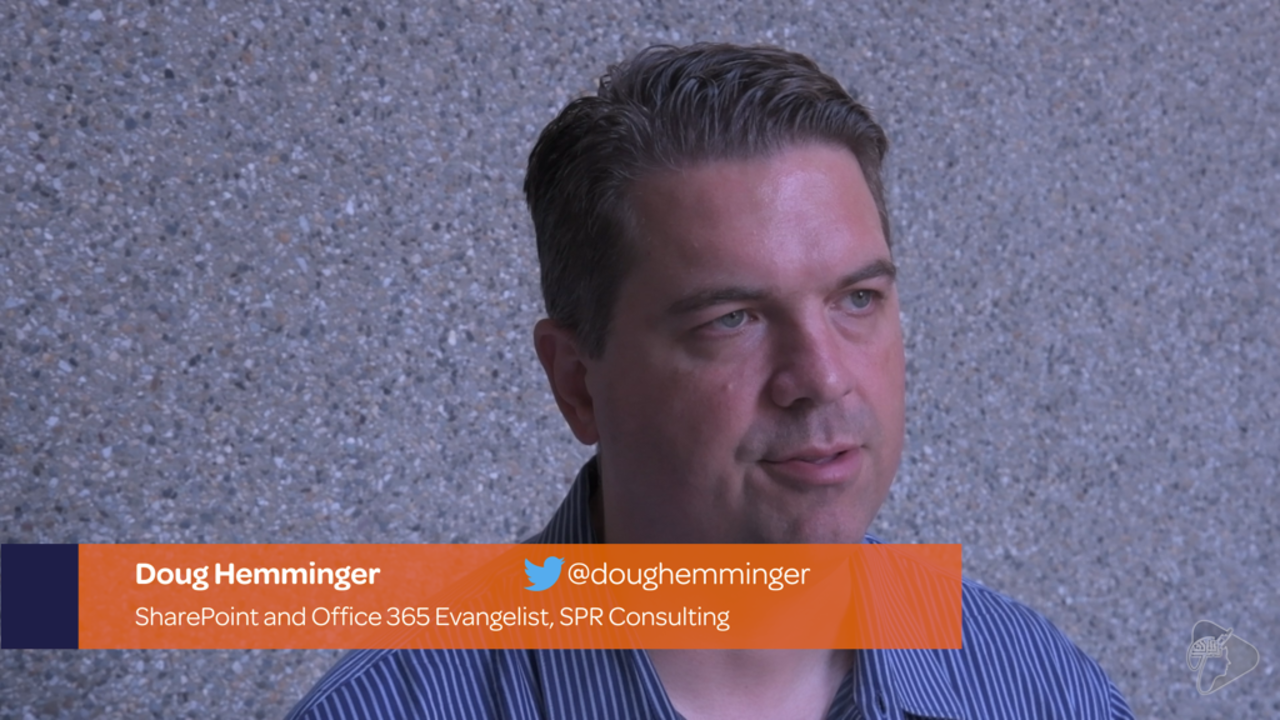 My name is Doug Hemminger. I am a SharePoint Developer, Architect, focusing on Office 365, now based out of Chicago. And, I work for a company called SPR Consulting.

I first heard about the Framework about a year ago. And since then, I've obviously kept up on it as much as possible as they sort of developed it and evolved it. And more recently, I've had a lot more opportunity, since it's gone GA to play around with it. But, I actually haven't implemented it yet for a client. I'm still waiting for the right situation.

I actually think they are absolutely on the right track. I love the rapid development cycle for releasing each of the capabilities within the SharePoint Framework. However, it's still sort of a limited scope, and that it's focus on UX type development in Office 365 within the scope web part.

Which is sort of good in some ways because it really helps them, Microsoft, focus on the foundation and building it correctly...the Framework correctly. But at the same time, it sort of limits its use cases and more broad use of cases.

I think the roadmap is very much on the right track. In the near term, I like that they're focusing on really developing the core set of capabilities and the foundation. Some of the things like, enabling access to the Graph, the Office Graph, or the Microsoft Graph, is key.

Building the capability to interact between web parts is key. Those sort of core capabilities are very important. But, longer term I'd really like to see them expand beyond the web part. Beyond the page itself and allow more robust interactions.

From what I can sense, although I haven't seen anything specific, that's where we're headed. So, I'm really excited about that.

I really like that it's developed, that it's based on Client-Side technology using modern web capabilities. But at the same time, it leverages TypeScript and has the capability to develop really good ALM support.

I can see it evolving to an Enterprise Class Framework, that is based on client-side technologies, client-side open-sourced modern web technology. That really excites me.

I don't think it's quite there yet. They've already started to put in some good ALM capabilities, and some things are happening. But, I just ... I'm looking toward the future and that’s what I’m excited about.

Well, I already mentioned the capability to access the Graph is key. And then recently, rolled out the Graph Http Client in preview mode, which is fantastic. I think that's an important thing for being able to access that data and surface it in and in theeb parts and in and UI.

So, I think that's a great thing. I'd also like to see ... I know you said one thing. But, I'd also like to see them continue to develop integration possibilities with other outside platforms. A lot of what my clients are facing now, is how do I get my on-premises system into the cloud.

And, most of them are not simple web parts, at least not the ones I'm working with. They leverage back-end data somewhere. They leverage other information that I think it would be great to be added to the platform and framework.

I would like them to make it easier to use some of the other Frameworks besides React, like, Angular, and some of the other ones. I think it's great that they allow us to use all those open-source Frameworks, but for some reason they haven't introduced a lot of sort of the capabilities that we have with React.

Many of them do, most of them do. And then, there are sort of these other developers, who maybe, they're coming out of school, or from other Java environments, who really understand the modern website, and the open-source capabilities. But, they don't understand necessarily SharePoint or Object Model, or even how to convert business use cases from SharePoint to what they need in an actual development.

And then, the other group needs to figure out how to learn SharePoint, and how to kind of understand business use cases.

Even though it's very narrow in scope now, like I said, they're really building the foundation to expand it well beyond where it is now, in my opinion. So when I look ahead 12 months, or even two years, I see a much broader adoption with features that expand beyond the web parts, maybe full page, or maybe integration capabilities with other systems.

That's not open, that's where I see it heading. So, that's what I think.

For people getting into the SharePoint Framework, I think the documentation starting going back to May, or a little bit earlier this year, was a little bit sketchy. It's getting better, but it's still kind of hard sometimes to figure that out.

I definitely recommend just starting your own little project to try and play with it. Download the toolset. Make something up that you were going to make, and just go at it. And, you're going to encounter a hundred problems along the way. Just try to figure them out. And if you need help, post on the forum, reach out to one of the experts. They'll be for sure someone who’d be willing to help you.