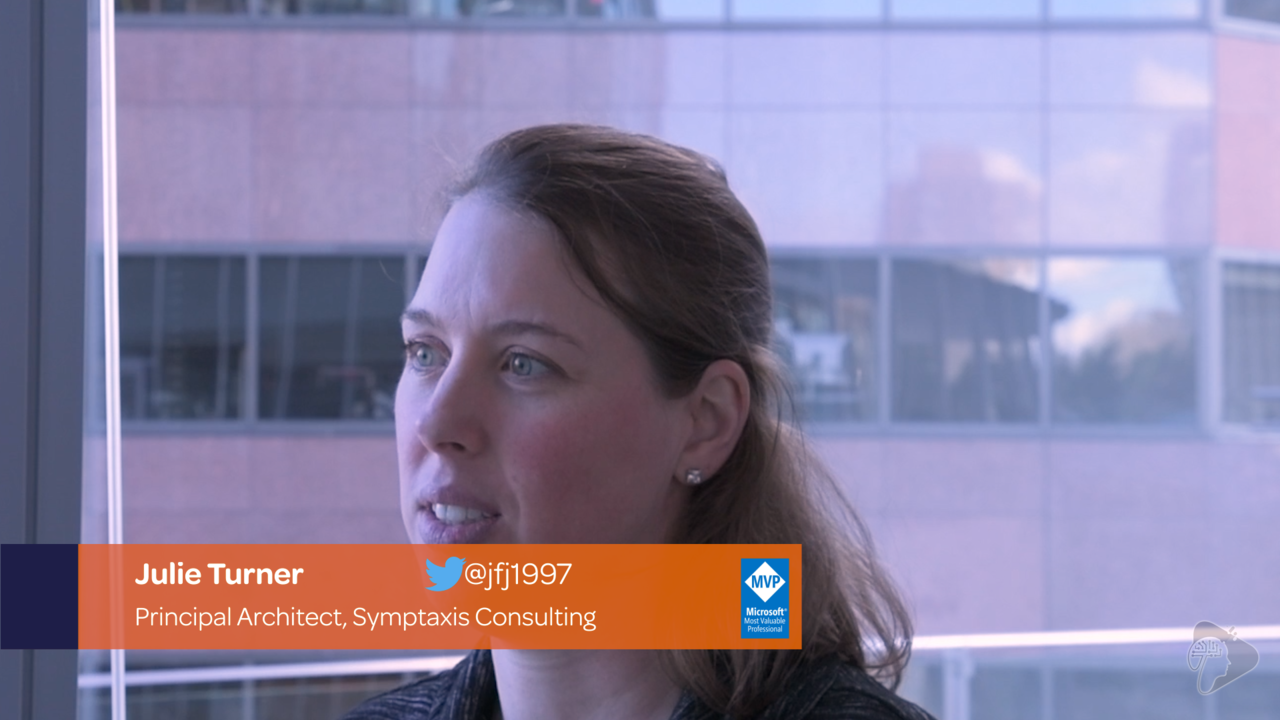 Hi, my name is Julie Turner. I am a Principle Architect with Sympraxis Consulting. Part of that, I work for Blue Metal Architects as an architect.

I came to SharePoint in 2007, when I was is internal IT for a small medical device company. Then, I decided that I'd like to get into consulting, so I shifted to consulting, stayed in the SharePoint world, and been moving in that direction as the versions come out, all the way through to Office 365 and Azure.

I went to the first Dev Kitchen that they had. I had exposure to the web parts there. Then, just playing around with it back at the home office, seeing what it could do, and that kind of stuff, but none really in production.

I think it was impressive how fast they got something out. They said a lot of things in the May 4th event last year. They had a lot of stuff to get out. It was impressive that they got it all out, tooled it out, and got to GA. My impression is that they're working really hard at it, and to be Open Source, so non-Microsoft. I think that's really great. I think they have a long way to go though.

The road map, as I've seen it, has some really good backlog items, and they're just all necessary. I feel like you could do some stuff, and if you're going to do a web part, it's pretty basic. You don't need to talk to anything else, and all of that stuff. The idea that you can be on Classic and Modern, that's awesome, but we really need things around being able to deploy to the site collection versus the tenant. Allowing a little bit more flexibility and flow around those kinds of things, I think, is critical.

Honestly, the work bench, that ability that I don't have to deploy a full ... I come from the 2007 ... You know this stuff, right? Where you're building a 64-GB laptop and full stack deploying your own SharePoint farm on your laptop. That was just always mental inducing, because you had to be an infrastructure person too. The ability to have that workbench, be able to spin it up, see how it's going, really debug, and get your bits together before you really have to deploy to the production, or even to a Dev tenant or Dev box. It just really makes a big difference.

We just need a way to provide a deployment mechanism that gets things out to the site collection, and not have to go to the tenant. The actual other thing is, we need a good story around the ALM model and where we're going to put those bits, those bundles, for access to the web parts, and how we're going to update them. That story really needs to coalesce.

It really feels like we need some support with the UI Fabric, for more than just React; AngularJS, even just core basic JavaScript really needs to be there, a little bit more fully supported, so that we can really exploit all the different platforms that people might want to use.

I think it's going to be adoption. We talk about this all the time. The traditional SharePoint developer is going to come from a C Sharp background and strongly typed. You have TypeScript. Moving from that Visual Studio to all these weird technologies, Gulp, NPMs and Node, and how to use that toolset, is going to be a huge challenge. I think adoption is going to be slow.

I definitely think they're full-in on this. To that end, it's first-party and third-party. They're using it to build the components that we're starting to see in Modern Pages and stuff. They're definitely going to be full-in and full-bore on it. I'm hoping that they adoption will pick up as people understand how to use this new thing, and that they get more functionality out there.

We're missing a lot of stuff in Modern around what JS Link was, Script Injection, and that kind of stuff. Once that is there, and this is a full story about what you can do in a Modern Page with the SharePoint Framework, then I think things will really pick up.