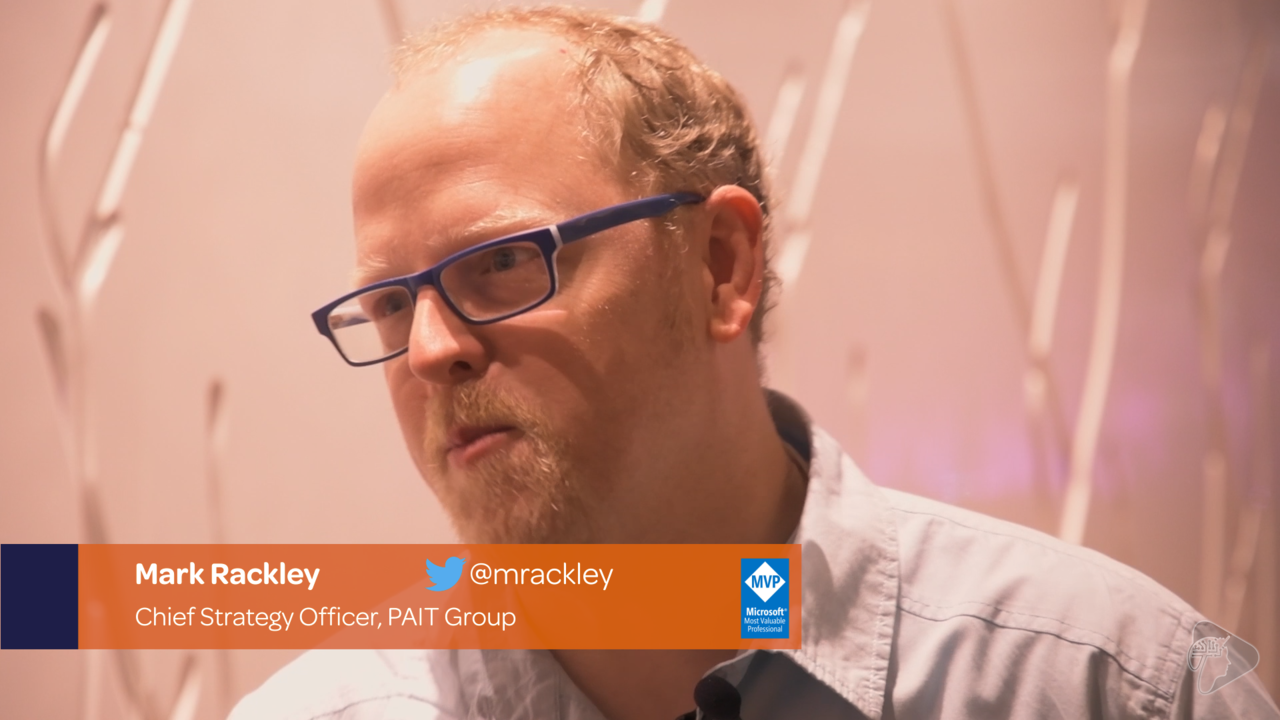 My name is Mark Rackley and I am the Chief Strategy Officer for Pait Group, that SharePoint consulting firm out of Cincinnati, Ohio. My background as a SharePoint developer goes back to the early days in 2007, so not quite the 2003 days like the old fossils, but in 2007. From there I did a lot of web part development, the feature development that you would do in Visual Studio. Then from there I slowly moved into client-side development, actually back in SharePoint 2007 because of some limitations we had with a client doing development in SharePoint.

I've been using the SharePoint Framework since towards the end of 2016, that's when I first started playing with it and getting my hands on it and digging around. I still consider myself fairly new to the Framework.

My impression of the SharePoint Framework today is that I think Microsoft is heading in the right direction. I think their concepts for the SharePoint Framework, allowing people to create their customizations and get them out of doing content editor web part customizations for some parts at some point, it's a good way to go. I think it's the right path, and I think it's kind of the natural evolution of the way people are already developing in SharePoint today.

My thoughts on the roadmap for the Framework is that I really like how open Microsoft is, first and foremost. I like how they're taking our feedback and making sure that they cover a lot of the topics and a lot of our concerns. I like where the roadmap is heading, I like a lot of the features that they're adding. I'm looking forward to being able to do more than just a client web part. I'm looking forward to taking advantage of things that we're missing today that hopefully they're coming soon, like custom actions and those sort of features that have been critical to us in the past but are currently not in the modern experience. I'm looking forward to getting those features back in the modern experience.

The one thing I would add to the SharePoint Framework today, and I've given this one a lot of thought, that I think I would like to see is more examples that are not React based. I think that they do, Microsoft, the team does a lot of React for everything they're doing and a lot of examples in React. Coming from my side of the house where you may not necessarily embrace a Framework or know React, they say you don't have to use React, you can use any Framework you want. Well, I would like to see some more examples where they're not using React so that we can get those people in the Framework faster.

The one thing I would change about the SharePoint Framework is probably this is going to get me in trouble with a lot of my server developer friends, would be the use of TypeScript and the way how embedded TypeScript is into it. I think this leads to the following question of the biggest problems people are going to have with it, so I'll kind of defer the rest of my response to that question. Yeah, I wish that there was not such a dependency on TypeScript.

That's an interesting question. The biggest challenge with the SharePoint Framework I think for a lot of developers is going to be understanding TypeScript. Because we have this huge world of JavaScript developers that maybe don't have traditional training in development. They don't have degrees in development, they don't know what an interface is, they don't understand the concept of classes. When you throw something like TypeScript at them, it's going to make their heads explode because they just can't wrap their heads around it.

The future of the Framework. I could talk about where I hope it goes, because I don't think anybody really knows where it goes, and there are so many opinions out there. I know people are concerned that they can't use Angular right now in the Framework and they think that that's going to hurt it. Some people think it's such a departure from the way .NET devs work that it may not be successful, like the lack of Visual Studio tooling. People are saying, "Well, that's going to kill it." I hope that's not what happens.

I hope that they continue to invest in it, continue to add features so that the client side developers out there can build that skill set and start developing more enterprise grade functionality. Web parts and connections and web hooks and all those things to create some really world class applications where they're just not throwing a script on a page and hoping it doesn't break anything. I hope that that investment continues and it just makes it easier to do our job.

For anybody who's thinking about getting into the SharePoint Framework, the best advice I can give them, from someone, I've been writing code for years. I've done .NET code, I've done Java, I've done C#, that's part of .NET, but I've done a lot of development. Still jumping into the Framework I was at a loss, because it is such a big change. I kind of had to just break things and then reach out to people who knew things to get the answers.

I would highly recommend that people actually do training. I've heard that there's a website called Voitanos, they have a Mastering the SharePoint Framework course. Don't expect because you're a great developer that you can pick this up. Actually, invest in some training, it's going to make your life a lot easier in the long term.