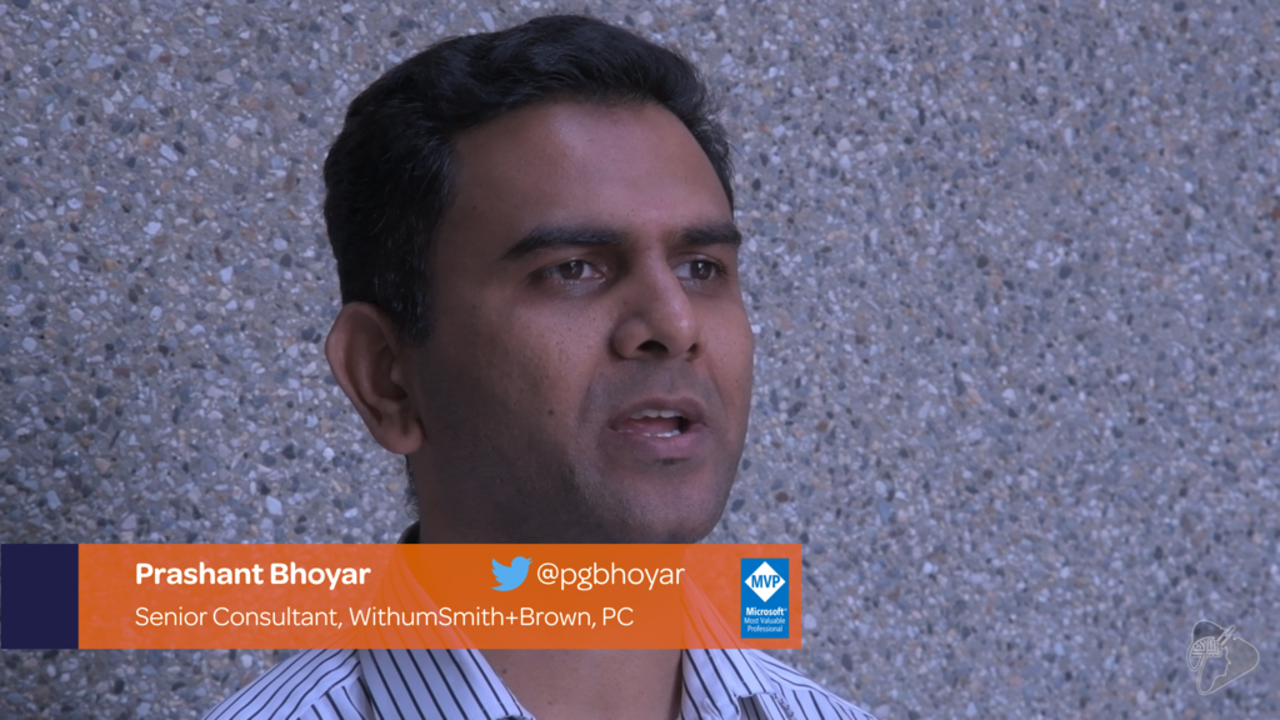 My name is Prashant G. Bhoyar, I'm from Washington D.C. area and currently working as senior consultant with WithumSmith, and Brown.

So I started working on SharePoint back in 2009 and since then I have worked on all versions of SharePoint that are allowed there. And I see myself as jack of all trades, so I have done pretty much everything except branding.

So as of today I'd say it's definitely a right step in right direction, and the way the strategy or the vision that Microsoft have is really good. Because that's where all of the raw industries, or all of the raw big developer ecosystem are going. Where they are using more and more open source tools so you're not tied up in let's say Enterprise specific tools like Visual Studio, that's really good.

So one thing I will add is the ability to develop web parts for a specific site. Because the real competitive for SharePoint Framework as of today in SharePoint online is the radius of methods people use writing [inaudible 00:03:22] just to get things that they wanted. And a lot of organizations, they have some kind of silos, and they have always access to their tenant augments. So to deploy any web part if I had to work with tenant augments all the time it might not work for bigger organization. So people will not have some kind of flexibility where, "Okay this is your side collection, you can play with it, you can do whatever you want, and you can build your own solutions for it."

The one thing I will change is the messaging that's happening from Microsoft. Because what I'm personally seeing is Microsoft is doing a really great job in promoting power apps and flow, especially Office 365 things. They are going to a lot of events, they are arranging a lot of Twitter Jams, they are also arranging a lot of sessions. But same is not true for SharePoint Framework, you hear from Microsoft about SharePoint Framework in big conference, or in Ignite. There is always Patterns & Practices you but the real face time with SharePoint group is missing.

So from developer point of view I think the biggest challenge is, especially if you are doing server side development from long time, getting used to the tool chain. Because there are a lot terms that you may never have heard of, and you may feel a bit frightened like, "Oh, what's this? Now just to write a single web part, now I have to learn all these six or seven things and I have to go through this set up?" So that is the biggest challenge I think, from developer point of view.

And from the organization’s point of view is, so one way Microsoft is announcing okay, Office 365 is a software as a service, so you use it and you shouldn't be customizing too many things in SharePoint and this is a framework to write custom things. So there is a lot of uncertainty, or people are like I don't know, playing wait and watch game. Just to see how this framework has matured and whether we should really be investing time and deploy the solution using that. And recent announcement from Microsoft on a couple of other development models also did not help. They announce about access services, they announce about sandbox solutions, so some people some organizations a little bit, they are playing wait and watch game right now since it's fairly new.

So I personally think in next six to twelve months there will be definitely on premise version of SharePoint Framework. I personally don't know whether it will be as good as, or whether all the features will come down to SharePoint Framework or not. And also some of the things they have mentioned in the roadmap, like the better ALM story. And I personally think definitely there will be single page application support, because right now if you have a web part framework where you just can create web parts, a lot of people may not use that right away. Because there is alternate which a lot of people are using. Especially developers from last three years, ever since they are starting moving to Office 365 and they announced adding model, and adding model there are some restrictions, like you don't have the full control on the page.

Whereas using some other methods, like injecting script into web parts or content into web parts, you can pretty much do a lot of things using the Microsoft REST APIs. So if that story is good, and it's there, and it's really available whereas here ... Okay, I can do this web part, I can use this framework but I can only build a web part. For this other stuff I have to use something else.

So for developers my advice is go through the Microsoft documentation on SharePoint Framework. It's one of the best written documentation, because not only Microsoft folks are writing it, some of the folks from community are also helping to make it updated. So if you go through it, develop your first web part, don't get just bogged down by "Okay, I need to learn all this stuff." There are a lot of uncertainty, people think, "Okay just to write a simple web part I have to learn TypeScript, I have to learn...let's see...React, or I have to learn Angular." That's not true, you can use any framework of your choice or you can simply go with JavaScript or jQuery as well. So just go with the flow and see how the experience is, and once you go with that, you know it's like riding your first bicycle, or riding your first bike. Once you do that once, you feel like, "Okay, now I can do it." And then you can then start implementing, developing some additional more complex web parts.