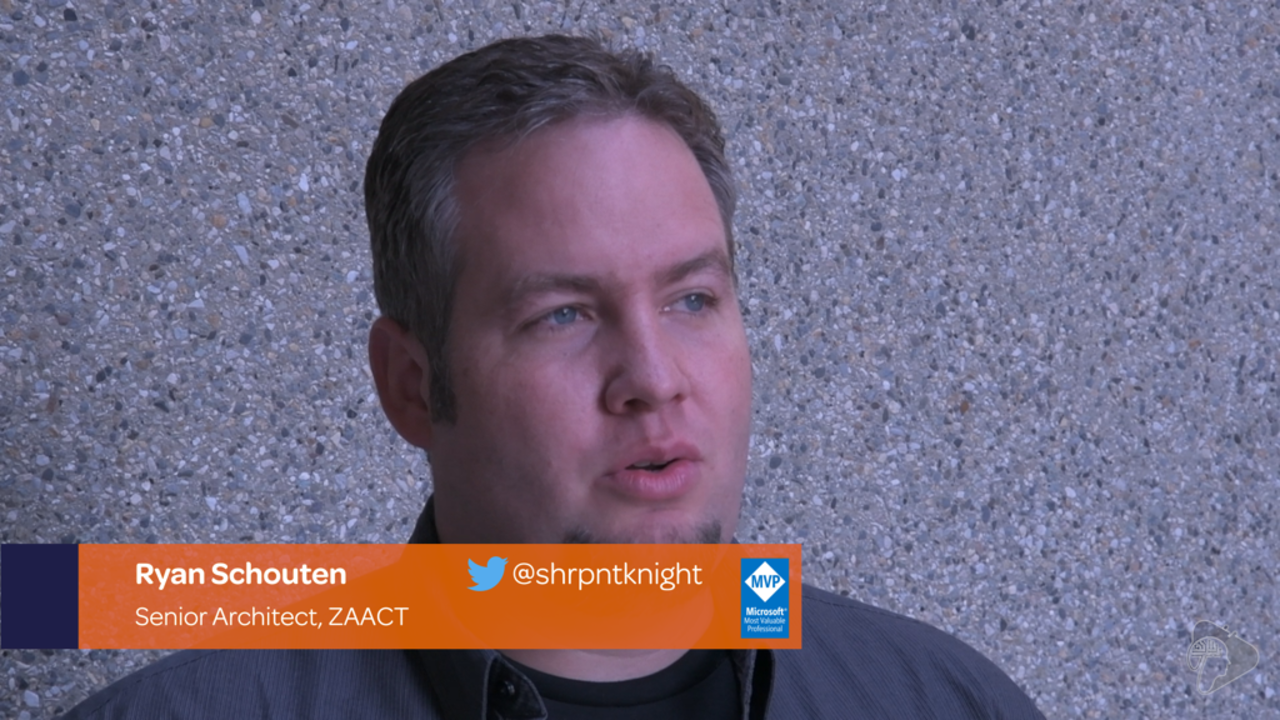 My name is Ryan Schouten, senior architect with ZAACT out of Utah.

So, back then being ASP.net, SharePoint on ASP.net works really well for me to be able to transition into. So, I was like, "Okay, sweet." And since then, loved it ever since.

I've spent quite a bit with the SharePoint Framework doing different presentations and working with it, trying it on different projects for clients. So, I've had a few months worth of experience with it. At least played with it with the preview version when it came out almost a year ago.

Today, it does some pretty cool stuff. It kind of ... My impression, it gets us a lot of what we have been used to developing with when it comes to SharePoint. So, if we have ... Previously we had deploying code and adding functionality to SharePoint the same way Microsoft did. Over the years and the cloud, we didn't have that same option, but now we're getting to the modern interface, we have those same tools, and the same methods of adding things into SharePoint, and we can do it all again. So, instead of being the red-headed step-child, we're now back to, not quite first class citizens, but we're pretty close.

My impression is that with the SharePoint Framework there's a lot of work that still needs to be done. So they have a lot to do on the roadmap. A lot of things that we need to see as developers in order to make this a completely viable solution. So, we have the client site web parts, they have the extensions that are in preview now that we can play with, which is a huge plus that we can work with it. Actually, yesterday they released the tenant level client site web part so we can now, instead of having to deploy them and say, "Okay, gotta add one of these to every single site I want to use." I can say, "Okay, deploy a tenant level and then we can just add those." So those are some big improvements that I think they've made.

So long term I think the roadmap looks good. But I think there's still some areas where, I honestly don't think Microsoft really knows where they're long term gonna go. They said, "Okay. Here's what we're working on now." Then beyond that just kind of spaced off of the feedback that we as a community provide to the table.

My favorite part of the SharePoint Framework is in large part the new tooling. 'Cause for the longest time as a SharePoint developer we were kind of behind when it came to development. So with the new tool sets we can say, "Okay, we're using the same tools, and I can go out and use the latest packages and the new things that we've got." Without having to say, "Okay, I'm kinda hacking this in." It's what’s the way we're supposed to develop.

The thing I would add is the ability to do more branding. 'Cause a lot of times the requests I get from clients is, "I need to make this look like my company." They want their own personal identity. So, without the branding a lot of the companies are like, "Well, we'll just stick with the classic view." When Microsoft gets there we'll release it. So I think that's one of the things I really wish they'd get in, preferably sooner than later.

One thing, I know the issue is the deployment mechanisms. The issue I ran into is trying to do web parts for both our internal company and for clients has been the issue with trying to templatize. So if I need to make a template out of a site, and deploy the web part it wasn't really an option. So now with the tenant level deployments we're getting close to there. I saw they announced they released it yesterday, haven't had a chance to play with it yet. But, that's one of those things that kind of gets us closer to being able to do that.

So, I think the biggest challenge is one, getting started as a developer. A lot of us are used to, okay we're just gonna plug things in, we're kinda hacking in with a content editor. So it's kinda changing mindsets a bit. Plus there's a lot of new tooling, that's one of the things I liked about it. But there's a lot of new tools that's kind of changing. If you're going from a server side developer there's a huge change. 'Cause previously we had Visual Studio, we had the full Microsoft tool chain. Now, with the SharePoint Framework it's a bunch of different pieces that you kind of have to kinda ... that are put together, and the Framework is really good about combining all those. So we don't have to try and figure that out on our own. But it is one of those things, you have to learn a different tool set to be able to work with. So, that's one of the biggest issues for developers.

I've also seen with clients trying to getting them to use it, just understanding what it is. 'Cause a lot of times, okay, Microsoft announces as part of the Virtual Summit and the future event, they're like, "Okay, here's the SharePoint Framework." But the clients like, "Okay, well we've got it." Now what is it? How does this benefit me? Why do I want to do this? So I think a lot of times, helping the people and customers and people in general understand, okay this is what the SharePoint gets you and why you want to start doing it, how it can benefit your business.

Long term they get into the branding, and a lot of the deployment pieces that we're used to when we're doing our current solutions. If we can get those pieces in there and get that in, I think they're gonna kind come up with those in the future, saying, "Hey, we've got these now, we have a fully robust tool that you can use." Then I think once we get to that point, adoption across developers will skyrocket. Plus, once we get the on premise stuff, I know I've talked to a lot of developers in sessions, they're saying, "Hey, oh this is some cool stuff. But, I can't use it yet." 'Cause they're stuck on prems. So, like, okay loved your session, loved what we're talking about, but yeah, I can't do much with it at the moment.

My advice would be, first for developers, is you need to get familiar and comfortable with client side development. I know there are a lot of developers over the years that have gotten comfortable server side code. But we need to kind of change our mindsets, we need to start working on JavaScript and getting used to TypeScript and all these other tools that are out there to be able to help us do the client-side development that we need. You'll have to be doing those if you're going to do the SharePoint Framework. You can't do C# in the SharePoint Framework, it's just not gonna happen. So, developers need to get up to date on the modern tools. So, know JS, TypeScript, JavaScript, all the tooling. The Gulp, the automation pieces that go with this, 'cause this is going to be things that make your life easier as a SharePoint developer.

For customers, for the most part they need to get comfortable with the modern framework. A lot of what we're going to be producing in the SharePoint Framework is going to augment what we're producing there. So it helps make things a lot easier.