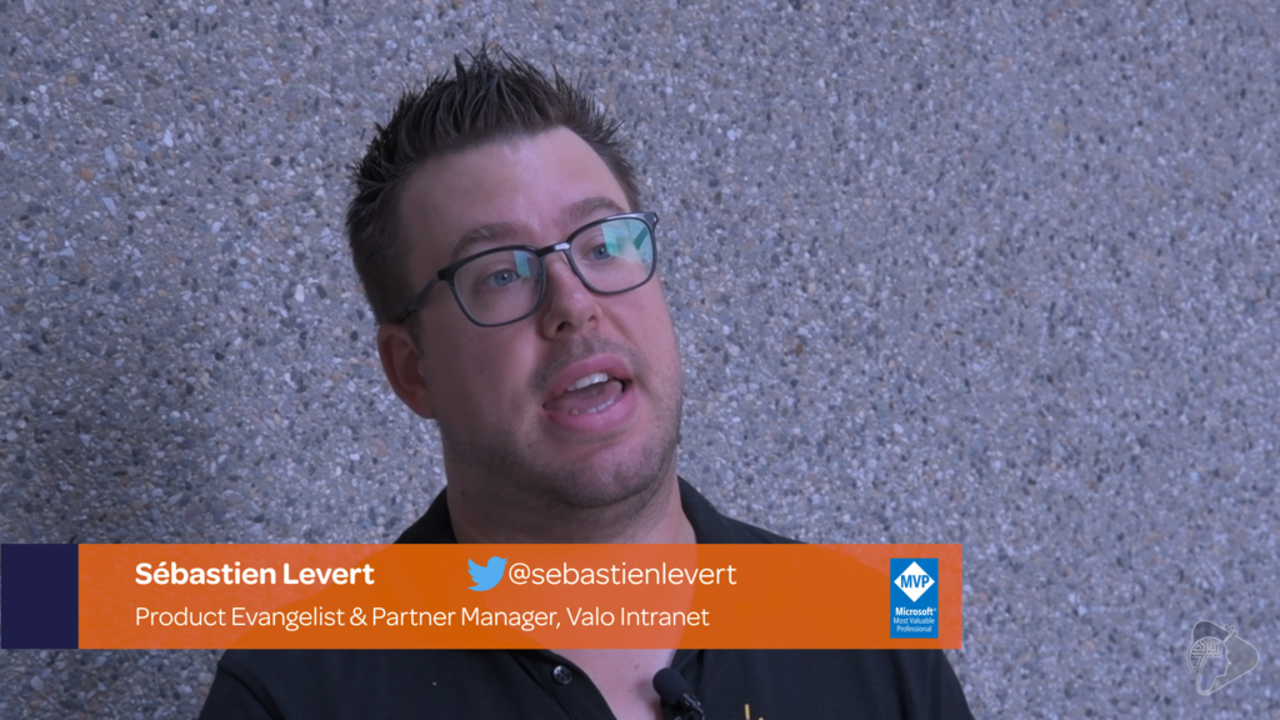 My name is Seb - Sebastien Lever, from Montreal, Canada. I am an Office Dev MVP, for now more than four years and a half, whatever that half.

I've been doing SharePoint for a long, long time. I'm a product evangelist and partner manager for a company called Follow Internet, where we manage a bunch of different partners here in the U.S. and in Canada. And I've been doing that for, now, more than 12 years.

So, my background is ... So, actually I was born in SharePoint. And I like to say that. I've been in an internship out of college, and someone asked me, "Do you know anything about .NET?" I said, "Yes. I'm very, very proficient in .NET."

"So, you know something about SharePoint?" You want to get a job, so you say, "Yeah." And then you're just starting that, and then the next day, you know you're working in SharePoint design, in full path design in 2006.

Five years ago, I did a big switch from back-end dev, .NET and everything, to entirely JavaScript and CSS and HTML. I bought a Mac at the time, with, like ... could not do any Visual Studio stuff in here. So, I just switched entirely to the modern stack, and since then that's what I'm doing.

Spent a lot of time.

The SharePoint Framework today is, for me, a very, very good step. I think it was something that was needed in the SharePoint world, especially in the dev world, where it was a nightmare for us to customize any SharePoint experiences through any of them other customization options we had, including add-ins and all that stuff.

I still think that it's not complete. That we need more than that to be able to actually really, really, really offer a nice experience to anyone building amazing solutions.

For now, it's pretty much only web parts and extensions, and that is, for me, not enough. Especially coming from a very, very deep .NET background. In there, it's ... I know the team is working hard on making things happening, but if we need to switch, there's not enough in there for me to actually switch and build all my solutions entirely on the SharePoint Framework. So, for now, that's how I feel about the Framework.

It's good. First, it's good it's public.

It's also good that we see what gets removed from the roadmap. Quite interesting to see. I think the roadmap, for now, is very, very, very ... it's not long-term, it's not mid-term. It's very, very short-term. We don't see a lot of what is going to happen in a year or so.

There's a bunch of different items that are cool, that we know that are requested by all the devs, and that needs to happen, but I want to see more than that.

I want to see the complete story. I want to see what you're aiming for today. And that will help us in shaping our own solutions, to try to take advantage of, at least, the mindset that we'll need in a couple of months or in a couple of years, to be able to build something today that's going to be still relevant in a couple of ... whatever version of the SharePoint Framework.

I would say that the web parts, just because it's the only part that actually really work today.

Though I really think that there's a lot of cool stuff happening on the extensions side.

If we go somewhere else, and just with the feature of the Framework, I think that the stack is what is absolutely amazing. I've been talking to a lot of dev's, that are not SharePoint dev's, because when you're a SharePoint dev, you're like cursed. Those devs are like OK, so I guess you're still doing like, .NET stuff in the web page form and blah, blah, blah. Stuff that are pretty boring, now. Like, no, actually I'm using WebPack, and I'm using all those different technologies. Like, oh, that's interesting. Actually, I will try it and I'll let you know. And some of my friends actually try it, and is like "OK. That's decent. That's interesting."

So, that's probably what is the most appealing for me and appealing for the community, as it's not only about SharePoint. It's about the stack and then you just use whatever you want in there.

So, I think that's something that is pretty cool and that's going to be a key for the SharePoint Framework to survive through years, as there is going to be a huge community around that.

Well, that is an easy one.

Been an Angular Dev for the last four years. So, I would like to be able to have that screen, no Framework, React and Knockout, whatever. I want to have Angular there. And be able to have mainly the Angular included in that Framework.

The reason why is that I think there is a lot of people around the Angular community that would help. I don't think Angular would resolve all the problems, I think it's just one use case that is added on top of the Framework.

First, I want to change the way that open source community should work.

So, for now, I'd like to be able to change stuff in the SharePoint Framework. I'd like to help Microsoft team to understand how we actually dev and everything. And go in and do a pull request on the Yeoman generator, or help them in understanding how I want to do stuff.

I know that gets hard. There's all those issues, we can put that. But that is questions, answers, and then thanks for your feedback and that's ... or it's going to be there in two weeks or in three weeks. I might be able to fix and help Microsoft building that.

I think the .NET team did an amazing job. When they open the code and actually they add plenty of pull requests and lots of new code from the community to be injected into .NET stack.

Why not the same thing for the SharePoint Framework.

So, that's what I would change, is to open up to the community. There's a bunch of excellent dev's that will help them to build what is required. I'm thinking I can ... in the past, when SharePoint was still a thing of the back end, was like that tool CKSDev that was actually built by community for real business scenarios where devs needed that kind of stuff. If I can have the exact same thing with the SharePoint Framework, that would be awesome.

So, I would say that, for ... let's take the entire SharePoint and Dev community. Lots of them are still doing on-prem dev stuff with .NET and all of that.

I think one of the biggest challenge is the transition from that old model, from .NET, from timer jobs, from event receivers, to something that is more modern and more cloud enabled. The more SharePoint Framework type of thing.

So, that means changing your entire build process. Changing the language you're using. Changing to JavaScript. Going to the async mode and not to be something that is in sync.

So, that is something that is extremely challenging for a dev. I think it's doable. I think there's a lot of parallels that can be done between TypeScript and C#, or MSBuild and Webpack, or Gulp, or whatever.

But that is a challenge that people, if you're really, really into the .NET dev, it's a hard step. So, it's kind of hard to ... OK. I will leave my Visual Studio on the side and I will now use Console and Visual Studio Code and change my entire tool set. So, that is something that, for me, is very, very challenging. Especially for large enterprise that builds skill sets on top of their team, and now they need to put that aside and start over.

So, that's one of the biggest challenges.

So, I'd say that where I want the Framework to be in maybe 18 months, is I want to have the complete story. Or at least future priority with what we have on-premises today.

But not only future party, but also come with great new ways of doing things. Renew features, renew capabilities that are not currently available in the SharePoint world.

And I'd like to see a lot more tools and modern features, modern paradigms in the SharePoint Framework to happen.

But still, I really ... if I look a lot longer than that, 18, 24, 36 months, I just want to be the defacto SharePoint customization start.

I want them to completely ditch the old model, and assume that this is a new model, and that this new model will rule the rest. So, they will bring it back to on-prem as much as they can, and then just use that and work hard on making things happening.

So, I think that my one advice for all enterprise dev's will be to start investing time in learning about those new technologies.

So, start by learning the foundations. Then, afterwards, learn the basic SharePoint Framework process. From the Yo generator to the gulp serve, to be able to package that. I think to know the foundations will help you build amazing solutions.

We don't care about how you write your web part or how you write your extensions but if you know what are the customizations available, how you can customize a SharePoint solution and how you can build a web part using the foundation technologies, TypeScript and all of that, then I think you'll be in good position to be able to move forward.

So, stop thinking about what's a web like. I want to be on a timer job. No. Think somewhere else. Go see Azure opportunities. Go see Azure functions. Use what the cloud has to offer to actually implement great SharePoint Framework solutions.