Last week’s Microsoft Ignite 2017 conference was the best Microsoft show I’ve ever attended… and I’ve been to a few. From multiple TechEd’s, Office Developer Conferences, SharePoint Conferences, Build and even the previous two Ignite conferences. At first, I was skeptical about Ignite being the big roll-up event replacing TechEd and thus, primarily for IT Pro’s. I thought there wouldn’t be enough developer content, but with nearly 35% attendees being developers, that’s over 8,500 developers this year and there was plenty of dev content.

The other tremendous benefit to Ignite: the size. Everyone is there. Vendors, Microsoft employees, and colleagues. It’s the best place to have conversations and get your questions answered. For me, it’s a love-hate relationship. I’ve explained the love part above, but the hate is the same thing: there are just too many damn people. Just check this one picture out that I snapped while walking across a walkway bridge on the third level of OCCC West (one of two conference center buildings occupied by the show, the other being OCCC North/South, not to mention a sizeable presence at the Hyatt Regency):

I attended Ignite as a member of the media covering the conference on behalf of the podcast I co-host with Chris Johnson , the Microsoft Cloud Show . We did a live show … this meant I had two badges, one for press and one as a speaker. Good times! 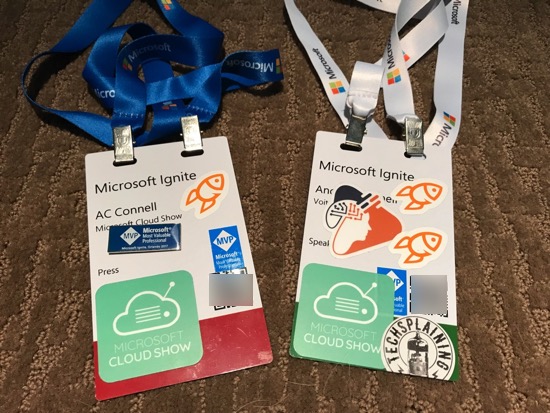 The week prior to Ignite, I launched the pre-release of my new course, [Mastering the SharePoint Framework]({< ref “/course-master-sharepoint-framework” >}). Everything you see in this post and more will be included in my course. This week I’ve been catching up on post-launch stuff, being out of the office during Ignite and planning the next few chapters. You can get this course, including all future updates, for 20% off today using my special pre-release discount MASTER-SPFX-EARLYACCESS. For those of you who are subscribers of the course, you can expect an update email from me early next week.

Info: Are you a SharePoint developer?
Did you know I publish a bi-weekly newsletter on all the latest and greatest news related to SharePoint, Office 365 and Microsoft Graph for developers? Yup, delivered straight to your inbox, get the recent news and samples published from Microsoft as well as key blog posts from MVPs and other influencers around the web. Interested? Signup here, [Latest News in the SharePoint Development Space]({< ref “/newsletter” >}), to get added to the list!

One question I’ve been asking around Microsoft is when we’re going to see the Modern Design get finished and strangle out Classic? The current state is frustrating… there are things that work in classic & things that work in modern. After, what two years, this is getting a bit absurd. In the May SharePoint event, there was even an announcement for a feature that made it easier to switch between the two. Regardless if you like Modern or not, two different UI experiences isn’t a good story and I really hope they get this wrapped up sooner rather than later.

In the session BRK3252 - Geek out with the product team on SharePoint lists and libraries , Lincoln DeMaris talked a bit about this, specifically on slides 3 & 24-27. Here’s what we know:

Why Do You Care?

So if you want to customize how a field is rendered, you can use a SPFx field customizer for a Modern list, but you still need to use JSLink if you are in Classic mode.

The most valuable session for SPFx developers I think was the roadmap session by Daniel Kogan who runs the team responsible for SPFx engineering. His session, while not titled roadmap, was clearly a roadmap session.

You can grab the slides & watch the recording of the session here: BRK2250 - SharePoint Development in the Enterprise (What’s New, What’s Coming) .

I also interviewed Dan & Vesa Juvonen for our podcast where we went a bit further: Episode 218 | Ignite 2017: Updates & Future Roadmap for the SharePoint Framework .

We first had a brief history of what had recently shipped with SPFx, including:

About a month prior to Ignite, the team released the ability to publish SPFx solutions across an entire tenant rather to each individual site. Before if you wanted to make a client-side web part available in every site, you first deployed it to the Tenant’s App Catalog and then had to install it in each site collection for it to be available. Now, a single checkbox option when adding to the App Catalog will deploy it for you, provided your package supports it.

This Feature Pack (FP2) brings the SPFx to on-premises SharePoint Server 2016. However, this isn’t the same version of SPFx that we have in SharePoint Online. At the time of writing this post-SharePoint Online (SPO) is at v1.3.2 but the SPFx version in FP2 is v1.0.2. Dan mentioned in his session this is because they had to ship SPFx to the FP team 5 months before FP2 release because of betas, customer validation, testing, etc. A quick check of the generator’s release history shows that v1.0.2 came out on April 5, 2017.

What does this mean to you? Only client-side web parts are in FP2, not extensions

What’s the story going forward for updates to SPFx on-prem? We asked this… maybe in the monthly CU’s, maybe in another FP? At this point, we simply don’t know.

Version v1.3.0 was actually released at the start of the Ignite conference.

This version of the generator addresses some challenges when creating projects for SharePoint on-premises vs. SPO as it will prompt you for what your target environment. It will take this information and only provide options for what are available, such as just client-side scripts if you are working for on-premises deployments while adding UI extensions to the SPO option.

SPFx extensions are now generally available (GA) in SPO for all tenants! These allow you to add a script to every page in a site using application customizers, customize the rendering of files in Modern lists using field customizers, and add buttons to Modern list and library toolbars as well as item context menus.

That covers what has been released recently and is widely available both on-premises and in SPO.

So what’s coming next? The following items are coming in the next few months. The goal is to ship all of them by the end of 2017… it’s quite an ambitious list, starting with…

SharePoint developers know we have a name-value pair property bag on things like SharePoint list items, sites, and site collections. Now we have the ability to do the same thing at the tenant level as well!

These are set by tenant admins using PowerShell cmdlets and can be read using a standard REST API request. They can’t be written to from API… they can only be set via PowerShell at this time.

I wouldn’t use these for something secure, like credentials, because they are still available via clear text by the current user with a simple REST request, but they are great for things like account IDs on telemetry tools like Google Analytics or Azure Application Insights.

Coming later this year we will finally see ALM APIs with associated permissions coming to SPO. This means we will finally be able to programmatically install, deploy, upgrade and delete not only SPFx solutions but also SharePoint Add-ins.

Coming later this year we’ll get an app catalog scoped to site collections. This means we can install SPFx solutions, and Add-ins, that are available only to that site collection and sites within that collection.

Today we have to deploy our SPFx solution to SharePoint to get it installed, but we also have to deploy all the resources to a hosting location such as a CDN. Coming later this year, we will be able to include our resources (JS, images, CSS, etc) with the package and SharePoint will deploy them to the Office 365 CDN for us.

This is just plain huge… HUGE! Tenant admins will have the ability to manage access to custom Azure AD applications and permissions. Our custom code in SPFx solutions will then call our custom REST API endpoints through the Microsoft Graph.

This was covered quite a bit in another session. Jump to the 41:28 mark in the session BRK3267 - Let’s build with SharePoint (Web Parts, Extensions and much more) where it is explained and even demonstrated live!

One, sp-dev-fx-controls-react is a collection of React controls you can use your SPFx solutions. These are distributed via an NPM package: @pnp/spfx-controls-react . Check the project wiki for examples of the controls:

Check out more about what PnP has to offer from the session BRK3066 - Advancing the SharePoint Developer Community (PnP) .

One of the last sessions of the conference, BRK4031 - Building the modern SharePoint experience: Best practices from Microsoft for developing with SPFx , had a few good nuggets of things many of us hadn’t seen before. Things like gulp serve configurations and some additional build tips and tricks.

I was going to say “that’s it”, but that’s a huge list! I walked away from Ignite with a positive outlook on the future of SPFx.

Make sure you check out the interview I did with Dan Kogan & Vesa Juvonen to hear it straight from them as we covered all the stuff above and more: Episode 218 | Ignite 2017: Updates & Future Roadmap for the SharePoint Framework .

You can learn all of this stuff and more in my course, [Mastering the SharePoint Framework]({< ref “/course-master-sharepoint-framework” >}), that I pre-released the week prior to Ignite. Right now I’m planning out the next few chapters and incorporating everything we learned last week about the future of SPFx into my plans.

Until next time… I need to get back to writing & recording! For those of you who are subscribers of the course, you can expect an update email from me early next week.

How to use React hooks with the SharePoint Framework (SPFx)
Monday, October 3, 2022